[SHOWTOGROUPS=4,20,22]
NVIDA just launched the RTX A6000, based on Ampere and a Professional Graphics Card series which holds 48GB of GPU memory. Double-speed processing for single-precision floating point (FP32) operations and improved power efficiency provide significant performance improvements.
With this release, NVIDIA is saying goodby to the Quadro brand it seems. The card is based on an 8 nm "GA102" GPU, the same as the GeForce RTX 3080 holds, but configured differently with for example that enormous 48 GB of GDDR6 memory along with ECC support. The new cards for workstations and servers have the GPU fully enabled, which is good for 10,752 Cuda cores. The GPUs for gamers have a partially disabled GPU, with 10,496 and 8704 cores for the RTX 3090 and 3080 respectively.

Second-Generation RT Cores
With up to 2X the throughput over the previous generation and the ability to concurrently run ray tracing with either shading or denoising capabilities, second-generation RT Cores deliver massive speedups for workloads like photorealistic rendering of movie content, architectural design evaluations, and virtual prototyping of product designs. This technology also speeds up the rendering of ray-traced motion blur for faster results with greater visual accuracy.

Power Efficiency
Featuring a dual-slot, power efficient design, the RTX A6000 is up to 2X more power efficient than Turing GPUs and crafted to fit into a wide range of workstations from worldwide OEM vendors. 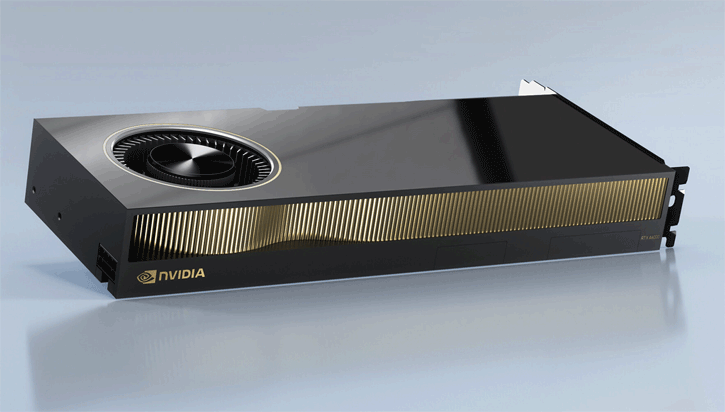